MOVE: Get out the way.

August is a pretty tricky month for me. My family has experienced a lot of life transitions (births and death) throughout the course of the month so there is always a mixed bag of emotions. This month serves as a time of reflection for me and many others as we move closer to the grind that is the FALL.

This Black August, we at CREAD are taking a closer look at the defining moments that reveal the persistence of Africans in the Diaspora. Our fight for liberation is rooted in solidifying ourselves as mouthpieces of our own experiences and speaking life into our unwavering ability to survive.

I’ve ALWAYS been personally connected to the Black Liberation group, MOVE. Growing up, I heard my family members mentioning MOVE and the tragic circumstances around them being bombed. Due to my age at the time, I didn’t really understand the magnitude of what my mother was explaining to me. She talked about the adults and children that were murdered in the bombing with outrage and anger. In addition to that, the imagery and pictures of MOVE members left a lasting impression on me.  I distinctly remember that they wore their hair in locks. They had hair like my family of Rastafarians and had embraced a natural way of living. Both my parents were searching for answers as the incident unfolded in May of 1985. My mother even wrote about their plight in a couple of her songs and has done more than a few speaking engagements with MOVE’s Ramona Africa. The MOVE bombing was a part of my initial introduction to the tragic result of what happens when systematic oppression, a false sense of power and violent weaponry collide.

MOVE, founded in 1972 by John Africa, is an organization based in Philadelphia that is comprised of primarily African American “family members” embracing “radical” ideas regarding everyday living. Africa collaborated with Donald Glassey to create “The Guideline” or “The Book” which served as directives for MOVE members to adhere to. The family members lived in a commune and embraced grass roots living, back to nature, and hunter-gatherer ideals, while rejecting the modern elements of science, medicine and technology. MOVE members were strong proponents of animal rights and confronted oppressive institutions in a very vocal and expressive manner.

Family members wore their hair in locks and changed their last names to Africa as a tribute to the motherland. They considered life to be the key component of their religion and believed in governing of self through natural law. The belief that natural law trumps man-made law is based on the idea that natural law doesn’t need to be enforced by anything external, it is enforced naturally.

The connection to natural law influenced the family’s views on self defense, principles of right and wrong, concepts of leadership, dietary preferences, and how to confront the system with revolutionary thought. The family members were Black, White, and Puerto Rican from various social classes and financial backgrounds committed to moving forward as a unified body.

On August 8th, 1978 (this day 39 years ago)  they had their first major confrontation with the Philadelphia police department and other law enforcement officials. They faced gunshots, the force of water hoses, and the brutality of a police department enraged over the death of an officer, James J. Ramp. This confrontation would set the tone for the violent, climax of this conflict in the bombing of the MOVE compound in May of 1985.

Just last month, Brother Mumia Abu Jamal (who often reported on MOVE before and during his current incarceration) provided the listener an on the ground description of the events and terror that the MOVE family experienced during this faithful day on his prison radio platform. (Take the time to listen to the radio broadcast before you continue reading.) 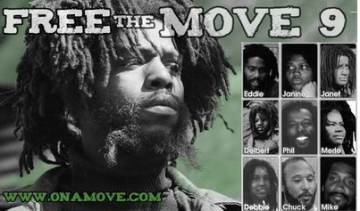 By May of 1980, Nine MOVE members were convicted of murder and deemed responsible for the death of officer, James J. Ramp during a shoot-out in Powelton Village, Philadelphia. The MOVE 9 were sentenced to 30 to 100 years in prison.

Tensions between the organization and law enforcement grew more confrontational after the events of August 8th, 1978. The media began labeling MOVE members as terrorists and their surrounding community was not welcoming and supportive of the organization.  Due to their stance on honoring all living things, members attracted vermin, rats, and various kinds of animals to their compound  which was not welcomed by their middle class neighbors in West Philadelphia.

The Mother’s Day MOVEment and Bombing

Today, we witness the numbing impact of Black people being violently murdered by law enforcement on almost a daily basis. MOVE matters now more than ever because those violent confrontations with lack of prosecution for taking the lives of innocent children set the precedence for what technology and social media invite into our smart phones.

In our classrooms, we put Christopher Columbus and his “voyage” of the Americas on trial in mock arenas for our students to examine the facts and draw conclusions. We should bring MOVE and their experience into our classrooms by examining their “Guidelines” and looking at the tactics that the Philadelphia government and law enforcement employed to confront them.

After this act, Philadelphia earned the shameful moniker of “The City that BOMBED itself” and not one of the people involved were tried and convicted for the fatal bombing.

Today, we honor the memory of our MOVE family members. And we know, that once our students know our history, they will be moved to act.

With Reverence, Salutations, and Blessings.