Three Years Since Michael Brown, Calling for a Decade of Truth Telling, Listening and Action

Three years ago, founder of the American branch of Peace Education and two time Nobel Peace Prize nominee Dr. Betty Reardon told me, “We need a decade of truth and reconciliation to deal with racism  because we are all complicit or impacted by racism. It’s in the air that we breath.”  While we believe a Truth and Reconciliation process is needed to heal the racial divide and redress past harms, we have learned from experience that truth and reconciliation, with reparative justice, does not address structural conditions.

On August 9th, three years ago, I joined the Ferguson protests because St. Louis (Ferguson is part of St. Louis) was my home. My parents, siblings, nephews, cousins and grandparents live in the St.Louis/Ferguson area.  At the time, my work in peace education, nonviolence, anti-war activism and restorative justice did not prepare me to witness the strength of the American empire on streets that I had been harassed by police on decades before.

While not quite prepared, I wasn’t surprised that police and other authorities in the 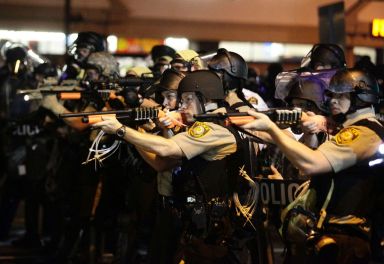 region seemed to value property and the flow of business more than the lives of outraged citizens expressing their right to dissent.  The continuous flow of news about police violence against Black people reinforces the care for property, not people.  The videos showing the police officers slamming the Black student onto the floor from her desk, first shows the officer carefully taking the computer away so that it was safe before he brutalized her.

What White Americans must face is, that there is a huge gulf that has yet to be traversed for Black folk to become human in this society.

It’s not new that the constitution held Black folk as ⅗ of a human. We were property.  This, as Derrick Bell founder of critical race theory describes in And We Are Not Saved, was the lowliest of states, where one was property from birth to death without hope of any kind of autonomy.  The inability to make basic life choices around marriage, childbirth and family was not allowed for the Black slave. The introduction of the Black slave class provided the elite landowning class a buffer from poor Whites who inevitably faced economic hardship in light of an already unjust labor system.

In such a state, where race determined humanity, Whiteness was prized, and prosperity derived from the oppression of others was justified through legal codes and pseudo science.

Today, police and prisons reinforce the sense that White America has difficulty seeing Blacks as human.  Michelle Alexander compares slave catchers to police and private prisons have historic links to slavery. The profiting from the ‘use’  of Black and non-White bodies continues throughout the U.S.

When I lived and taught in college towns in Pennsylvania, I saw how one of the primary economic drivers throughout the state were federal, state and private prisons. Many communities and thousands of businesses around the U.S. are deeply dependent on prisons for their survival.

Sadly, there is little change to report from three years since Michael Brown Jr. was murdered and the protests began. The power resides in White supremacist institutions and the individuals that support the same order. Yet there is hope.

There is a new sense of consciousness, where people are woke and acting independently to secure their basic needs. Also, history teaches us that no group is a monolith. The fugitive slave laws required White persons to assist in the return of slaves or be subject to heavy fines and or jail. Yet there was deep resistance; as there is resistance to the violent deportations of our Latina\Latino\LatinX  brothers and sisters.

In this political moment, peoples whose immigration status, religion, sacred land and sacred bodies, that are most at risk should and must lead this struggle supported by our White Allies.

So in the coming year, I believe we need a decade of Truth Telling, Listening and Action. The purpose of this decade is to provide a framework for political education overlapping with the UN decade for the people of African Descent and encouraging action that responds to the Truth being told. We would see our stories told in communities across the U.S. to create our own narrative, connecting the past to our present conditions.

The stories told in the decade of Truth-Telling connect historical trauma to our current experiences, as reminders and reasons to demand reparative justice as a first step in truth and reconciliation.

In these and so many other cases, the U.S. has never listened, accepted responsibility, made policies or provided broad education to counteract simmering feelings of hatred and racism after flash points in history.

This is a history schooling can no longer ignore. Broad public education must be undertaken to insure future generations fully understand this society.

In the Ferguson-St.Louis community, we started our own process we described as Truth-Telling, to make sure we had a record of what people experienced. We consciously focused on internal healing and reconciliation, so that forgiveness would not be expected without repairing the deep harm that has traumatized generations.

The Decade of Truth Telling, Listening, Healing and Action would center voices of color, from marginalized communities to have their truth acted on in ways that actually repair harm, by supporting Black folk in ways that actually build capacity in our neighborhoods. For instance, in Black communities, where the majority of teachers, non-profit support organizations, police and social workers are White, there is little culturally relevant support for youth and families.  Our communities are taught to look elsewhere for leadership and basic support.

In a society where money is valued, reparations is a reasonable expectation for a society that has benefited from the use of Black bodies since our arrival in the western hemisphere.  Reparations or reparative justice includes more than money.  Georgetown University provides an example.  Other examples include but are not limited to: proportionate employment in Black and White communities and institutions; percentage or fee paid by middle and high income persons or their parents-when moving into gentrified communities like Detroit, Washington, D.C., Harlem, Los Angeles etc.; Black State Colleges and Black and P.O.C. should be paid reparations for failure to fund equitably.

While this day symbolizes the spark of a new kind of protest, let us remember Michael Brown Jr. and the many other people killed by police, as a call for rejuvenated struggle. While we do this work, let us listen to each other, to awaken more folk to the struggle, build political power around our narratives and to support and heal together.

We ask that you join us for our webinar on August 17th where we will share the stories from Ferguson and beyond in our online learning platform “It’s Time to Listen”. You can begin the listening and learning now.

By Dr. David Ragland, Co-Director of The Truth Telling Project