So, today I want to welcome another brilliant mind to our CREAD space. Yall see we got summer treats on deck. We’re expanding our contributor pool in order to ensure the entire community gets to share their voice. And if you want a chance to rock the mic contact me at Khalilah@creadnyc.org.

Yurrrrrrr! For those of you who that don’t understand the multilayered street language of New York ; yurrrrr simply means Hello Good Sir! or How are you good chap? (or whichever form of Victorian English you subscribe to.)

My name is Vincent Deas. I’m a proud father to a lovely little three-year-old girl, a native of Brownsville Brooklyn, an innovator, a thinker and central to all of that, I am a child of the African Diaspora.

Let me start by acknowledging that the CREAD family just got a major injection of TESTOSTERONE in this Bishhhhh. Secondly, I’d like to give major thanks and praise to Queen Khalilah Brann and the rest of the Queens on this amazing blog. To be offered not only a shot but also regular rotation on your platform is an honor and for that I am grateful and humbled.

I’ve admired and at times have been lucky enough to work closely with the CREAD family,  so I feel very familiar with all of you out there already. At the first ever Decolonizing ED conference, we held a workshop where we spoke about the Pedagogy of Trap and the ways in which we validate the actualized lived experiences of our youth, specifically our black and brown youth, as we analyzed the lyrics of trap music as we would any other literary text.

We often speak of innovation and art, yet we discount the music of our young men and women, which in turn discounts parts of their culture and lived realities.  This is evident in them feeling displaced, and feeling that they don’t belong in the classroom or academia. But why do we as adults silence young voices and make them feel inadequate? 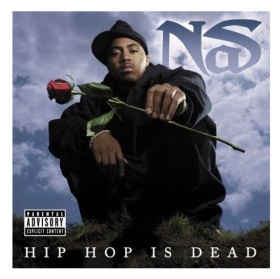 In 2006, when Queens Bridges’ own, rapper Nasir Jones dropped his eighth studio album, infectiously titled “Hip Hop is Dead,” musical fans nearly died too. I mean, hearing the New York legend and arguably one of the top five best MCs of all time (The god MC Jay Hova being the first. Oh I’m a millennial from the heart of BROOKLYN, so go ahead and debate with me all you want) proclaim that the genre of music that had given him fame, fortune, helped him produce ETHER, and even give him Kelis (yea yall remember her, HA) was dead, was almost too much for rap loyalists and die hard hip hop fans to conceive.

Shit, before Nas said “Hip hop was dead” many us were thinking it. True hip hop heads like myself were engaged in debates and fierce arguments around the topic. But when Nas, an MC who is considered one of the ‘top 5 dead or alive’ (As Jadakiss would say) jumps out in the mainstream and utters such a statement; well at that moment it’s like we all felt the weight of the supposed corpse of hip hop bearing down on us all.

I bet we all would be a lil tight to find out that in fact Nas was not proclaiming hip hop’s death!

Everybody sound the same, commercialize the game
Reminiscing when it wasn’t all business
It forgot where it started
So we all gather here for the dearly departed
Hip-hopper since a toddler
One homeboy became a man, then a mobster
If it dies, let me get my last swig of vodka
RIP, we’ll donate your lungs to a rasta
Went from turntables to MP3’s
From “Beat Street”to commercials on Mickey D’s
From gold cables to Jacobs
From plain facials to Botox and face lifts
I’m looking over my shoulder
It’s about 80 people from my hood that showed up
And they came to show love
Sold out concert and the doors are closed shut

Nas realized that rap and hip hop in general had become stagnated, not living up the legacy its forebearers had set in place. Either due to the hyper-commercialization of the hip hop industry by white music executives, or the shift in the spirit of the times; hip hop was changing and perhaps reverting, but it was not in fact dead.

Great ideas miss their mark at times and this was true in the case of “Hip Hop is Dead” an attempt to recreate the legendary rap group De La Soul’s second studio album “De La Soul is Dead”. This unconventional yet daring attempt by the group to re-establish themselves barring the aesthetics and vision that made their first album a success, is what cemented the trio’s place as innovators in hip hop history. With this understanding, it’s safe to say that Nas was challenging himself and the rest of the hip hop community to be risk takers and dare to dream bigger, to consistently work to re-imagine the music and spur the culture onward. 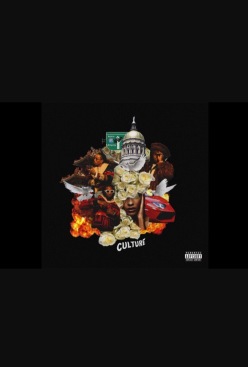 Now while some of the musical choices since 2006 have been unconventional, breaking away from the grizzly images associated with the gangster rap of NEW York and California in the 90’s and early 2000s, it’s safe to say that hip hop is alive and well in all of its non-conformist glory.

With their 21st century approach to lyricism, their 808 filled beats, and the flare to create rhythmically diverse dances to accompany the sounds, Hip-Hop is still selling albums and selling out shows full of young black and brown people, as well as their white counterparts, in arenas and and stadiums across the US and abroad.

Across the landscape of the musical genre of rap, we’ve seen huge shifts in the messaging, shifts that have often lead to the criticism and/or calling out of music for being violent, misogynistic, and riddled with talks of drug use and addiction. We criticize the artist but never the over saturation of a market, controlled almost single-handedly by white men and then wonder: Where are the positive messages ripe with social consciousness and black pride?

While the trap sounds of places like Atlanta, as well as Chicago, and the street rap of New York city’s mean streets seem to speak only to a culture of turning up that adds to the perpetuation of more young men of color into the school to prison pipeline, I’m happy to say that not all hope is lost. Among the constellation of superficial decaying stars, there are contemporary artists on the horizon poised to lead a generation that many deem lost. These young men and women are using their voice in hopes of not merely seeking fame and getting that bag, but most important as a sounding board to echo the sentiments of the progressive young minds of millennials. They are using their songs, spoken word pieces, dances, and style as springboards for a more conscious and diasporic sense of thinking. 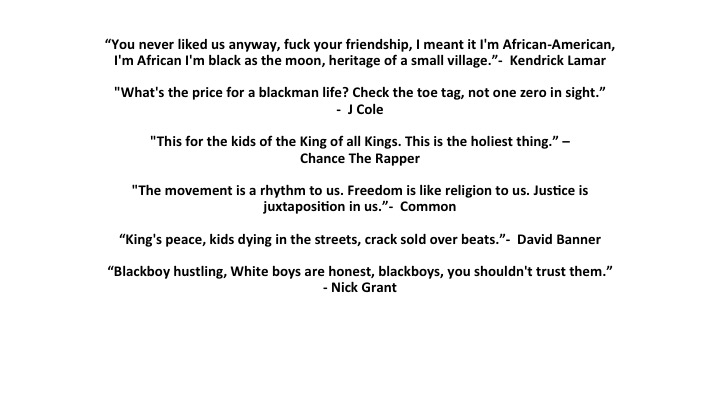 These different platforms are being used to educate the masses on our history and engage them in powerful and meaningful way to gauge our future; not only as Americans, but as Africans in America. The leaders of the new school aren’t artists confined to any particular genre base or selective to any particular region of the map. All across the slums and ghettos of America, there are young members of the African diaspora helping to shift the narrative, while planting the seeds that will one day spark the next great crop of revolutionary minds, many of whom are finding their foothold in music. From Kendrick, to J Cole, to up and comers like Chance the Rapper and Vic Mensa, the new school is ready to voice their thoughts on the status of our people in this country. Bolstered by a more established group of veterans like T.I, David Banner, Common and a slew of others, a more powerful messaging and sense of urgency has not been lost.

How do we take TuPac, Jay-Z, Lil Wayne, Rick Ross, or even the Migos and use that as a conduit for teaching and learning Malcolm X, Marcus Garvey, or Maya Angelou and the likes? Music is text and in this contemporary landscape we have artistry ripe with messaging that speaks to innovation and social consciousness, as well as entrepreneurship. Knowing this, how then do we use this text to understand the lived experiences of our black and brown students and their many intersections? How do we use this as a way to make deep and meaningful connections that are necessary in the relationship between the pedagogue and the student in order to foster greater academic output?

To be culturally responsive, we must first shed these superficial notions of culture in order to get to the hearts of our kids and then move past that to help sustain these identities, so that we may tap into the true potential of our diverse students.

Disclaimer: (Imagine the voice at the end of the prescription medication commercial, the one where they tell you all the ways you may die by taking this medication for foot fungus, fast and somewhat incoherent) The following term may be offensive to some as the opening line is a controversial greeting for some and for others an every day expression of love and appreciation. We here at CREAD hold diverse views of the use of the term and since we bangs with an unapologetic and unconditional love of all things Diasporic we say if you’re offended, imagine another word in its place and read on. And if you can’t do that, we gotta ask, how you work with young people? But that’s another post for another time.

Before I get outta here I wanna take a moment to pay homage to the illustrious, the notorious and at times controversial, Sir Marcus Garvey. This weekend marks the anniversary of the death of a man, who in ten short years, grinded harder for the liberation of Africans in America and abroad then a lot of others did. This weekend, pay reverence to and peel back Sir Garvey’s multilayered legacy and examine it thoroughly. From the trumped up mail fraud charges to his deportation, and all of his fight for Africans both here and in the motherland.

Honor him and teach your students of his greatness. Engage them in the parallels of Marcus Garvey and say, a Jay-Z, and then take the conversation and the exploration further. Challenge yourself as well as your students to be reflective as you grow and learn on this journey together. Maybe we’ll love him once he’s faded to black.

I want you all to have a safe and pleasant weekend, full of libations and the diverse sounds that encompasses Black Music History Month.

Hold it down good people!! Blessings!!