What about your friends?

As I mentioned, white supremacy is a belief system. Like being raised in a Christian or Muslim home, being raised in a white supremacist nation informs our values and behaviors from the moment we are born. It shapes our traditions and institutions and it impacts how we interact with our world every day. With that said, I consider myself to be an apostate- one who formally rejects a belief system they once belonged to. I like the word apostate because it requires that I admit that I was indoctrinated in white supremacy, and in order to shed it, I am required to consistently and explicitly reject the values and behaviors of this belief system I know to be false. It also requires that I challenge the rituals, customs or practices that uphold this belief system. With that said, I humbly offer the following suggestions to other white identified folks who are looking to dissent the dogma that places whiteness at the center of human achievement. 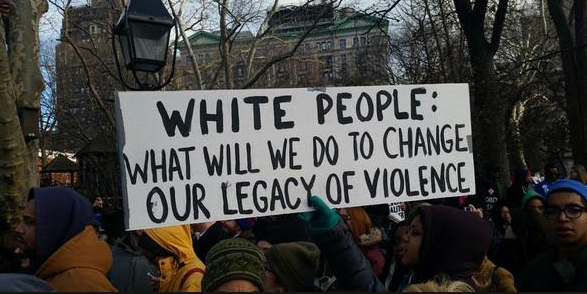 Erin Dunlevy is an educator and restorative justice trainer with over 14 years of professional experience in NYC public schools. Her work has focused on developing and implementing strategies for addressing institutional oppression within school systems. She continues to work as a consultant throughout NYC schools to help further the work of dismantling racism and white supremacy.