/Hey there CREAD family! Today I bring to you the second installment in a three-part series from my trip to Benin called Diaspora Spotlight.

Now, you know we live for the music  and if you have been following us for a while, you know we love to shed light on this important aspect of our culture.  So it is fitting that music was one of the first cultural experiences I had when I arrived in Benin. During my first weekend in Cotonou, my friends and I went to Africa Sound City, a cultural performance space owned by Jah Baba.  Jah Baba neé Oladipo Abiala is an internationally known singer, music producer and cultural activist.  His establishment, however, is more than just a performance space. It is the cultural pulse within the city of Cotonou, which is the economic center and largest city in Benin.

When we arrived at Africa Sound City that night, I was struck by the images of musical legends that adorned the walls. Images of musical icons like Bob Marley, Fela Kuti, Miles Davis, Angelique Kidjo (a native of Benin) among others gave me the feeling that this place was “very Black” and unapologetic about it. On this particular night, Jah Baba was not performing but rather a local artist and full-time teacher, Dele was on stage.  He was delivering a heartfelt tribute to Bob Marley. I am always struck and yet not surprised at how beloved Marley is all over the world. During his set we, of course, were compelled to sing along and before I knew it, a small crowd gathered in front of the stage dancing and taking tries at solo parts in the songs.  The energy and connection was palatable and I was grinning from ear to ear because I was in Africa belting out “Redemption Song.”

Although this moment captures the essence of Jah Baba’s vision for Africa Sound City, I took the opportunity to delve deeper with him about his inspiration, his role as a music activist and his views on education in Benin.

Although Jah Baba doesn’t attribute his musical style to any particular artist or genre; he does recognize the impact of his grandmother’s sage advice in the development of his career. He explains that she was an educator and an activist and very focused on culture. She was the first to recognize his talent and helped him to realize the activist within himself.  She encouraged him to promote African culture and most importantly to show African people that they can trust in their cultural riches.  As his first advisor, she gave him the confidence and assurance to pursue his musical career and stand up for his culture. 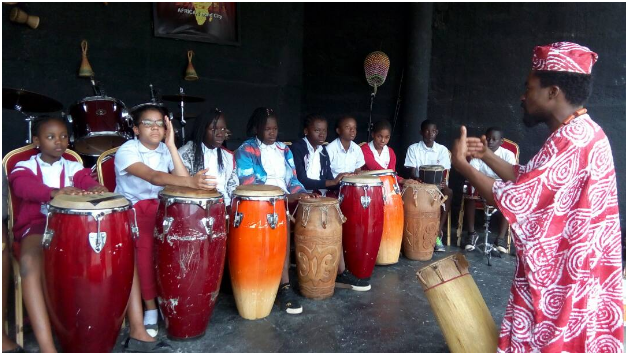 Jah Baba is clear that his role is to help Africans, specifically Beninise, feel confident in their music and creativity and to help young Africans to see that there is “nothing better than home” and as long as they are hardworking, they can succeed.  He feels strongly that “everything they need is in their culture and that they should not lose their African identity.”  Jah Baba believes wholeheartedly that “if you lose your identity…you are no where…you can’t be yourself.” Through his music, he delivers a message for importance of culture, community, respect of elders, honoring women, the value of relationships and the importance of family. 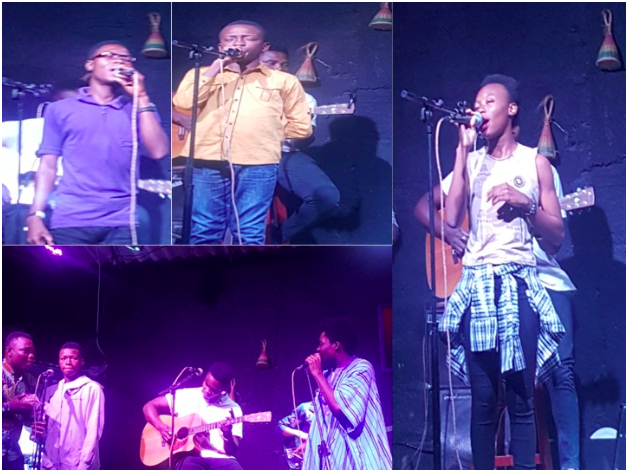 When I asked him what instruments he plays, he told me very confidently, “I can play anything.” The bata is the traditional drum that is the signature element to his music. Yet his wide-ranging talent does not stop there. Jah Baba is also amazingly multi-lingual, speaking as many as 10 different languages and African dialects, including: Yoruba, Egun, Fongbe, Mina, Ewe, Zarma, Adjagbe, Nagot, French and English. When asked about what languages he mainly performs in, he explains that he performs in any of these languages and that it depends on “how the song or music comes to him.”

Jah Baba’s main goal is to promote young African musicians.  He notes that there is no place in Benin to perform, to exchange knowledge and creative ideas, apart from Institut Francais; which promotes French culture. He saw the need for a place where artists could play and express their talent and art. He also saw that the traditional music of Africa was being neglected and the interest in “foreign music” was taking over.  Africa Sound City is a place for learning and leadership in the artistic community of Benin.  Jah Baba wants “to be here to encourage people to go to their roots and to get to the essence of the spirituality of African music.”  Furthermore, this emerging cultural center is focused on promoting healthy living, African fashion and aesthetics and on becoming a premier location to host international musical acts and to promote cultural collaborations.

When asked about his view of education in Benin, Jah Baba does not hold back.  He sees that the current education system does not focus on cultural relevance but rather promotes further assimilation to Western standards and ideals.  He says “there is an emphasis on knowing things but not to be truly educated…” From his perspective, the minister of education and other politicians prioritize their own agendas but not what is in the best interest of Beninise people. Jah Baba is disappointed to see the system is “moving African youth away from their culture and youth do not have knowledge of their history but they can tell you about European or American history.”  The solution as he explains it is that “schools must be focused on giving children knowledge of traditional ways of healing, nutrition, and spiritual traditions.” School, in his view, is not just for learning foreign languages and kids are not learning who they are. Jah Baba sees his music as a weapon against the mis-education of African youth.  “I am fighting these ideas through my music so that children can be more developed in their culture.”

I have long understood the importance of cultural institutions to my work as an educator but my experience of Africa Sound City and the cultural activism of Jah Baba, further solidifies my belief.  His candid assessment of the education system is very much like what we work to disrupt here in the United States.

Jah Baba’s perspective on African culture and youth points to some of the core ideas found in the Woke Cypha framework: Music as text, Sankofa and CREAM.  I am inspired by Jah Baba’s vision, commitment and his love for African people.  His work reminds us of the need for spaces and institutions that are “for us and by us,” so that we can experience true liberation.  As we continue to strengthen our commitment and solidarity throughout Black August, I hope that Jah Baba and his work and vision inspire you to make your classroom an unapologetic space for students to be authentically themselves, to get rooted in their culture, express their talents and be encouraged and supported.