The two most dangerous things to Black people doing equity work are:
1. “Educated Black” people as Carter G. Woodson calls them in “The Miseducation of the Negro” and
2. Well intentioned White people

Now I know most of y’all are giving me the crazy side eye like WTF?

But wait, like you, I fit into one of the two aforementioned categories. So before this goes way left, let me just say that I’m not trying to vilify either of these groups.

But both of these groups got major issues.

The bullshit done by both of these power brokers has helped perpetuate the social inequities that help oppress us today. Shit like when Avon and Marlos crew was beefing, killing more Blacks and destroying their neighborhoods, instead of realizing they just need to cut the middlemen (some sketchy Eastern European suppliers,) and the lame politicians and shady real estate developers out the picture. Stringer Bell be the “Educated Black” dude who done forgot his roots, and literally goes against the grain. See where that got him. Instead of using positions as a means of creating equitable conditions, they just out here further marginalizing Black folk.

“Educated blacks” and well intentioned White people have the “most” power in doing equity work, a power they usually misuse and abuse, because of their lack of understanding of how to wield that power.

My educated or, Boujee Black folk, as I affectionately call them, don’t play when you question them about their actions versus their intent, or their reasons for doing equity work. Just like they don’t play about their trap yoga, and their room temperature water. I be at these boujee peoples cribs and can’t find an ice cube or slightly cool water to save my life.

But, they’re the ones who would often say, “well my intentions were pure” after they mess shit up and I always think, “that’s a weak ass excuse.”

But hell, you gotta question them, their intent and push them on their weak ass excuses in order to get them focused on their actions.

When educated Blacks graduate from our PWI’s or HBCU’s with our fancy bachelor’s, or even fancier, advanced degrees, we take our liberal attitudes out into the world with us; trying to indoctrinate others. However, we unknowingly promote the will of the oppressor and promote anti-blackness while building up our assimilationist aspirations for Whiteness.

In this way, we are miseducated and taught to despise everything and everyone that represents Blackness. Now, I didn’t say this. Carter G. Woodson said it in his landmark book, The Mis-education of the Negro.

But you know. I agree.

Woodson states: “The “educated Negroes” have an  attitude of contempt toward their own people because in their own as well as in their mixed schools, Negroes are taught to admire the Hebrew, the Greek, the Latin and the Teuton and to despise the African.”

These assimilationist ideals have the “Educated Blacks” looking at you crazy when you have the audacity to extend casual Friday to other days of the work week.

As if me trading in my Oxfords for my Jordan’s diminishes my intelligence from the day before. Or like if I’m listening to Kendrick Lamar in the office, that maybe a lunch break at Trader Joe’s will quell my radical demeanor. In their attempts to appease White counterparts, they actually begin judging you in the same ways that White people do. Like they forget they’re Black and where they come from.

I think I heard a song about that recently lol.

Woodson goes on to ask, “the only question which concerns us here is whether these “educated” persons are actually equipped to face the ordeal before them or unconsciously contribute to their own undoing by perpetuating the regime of the oppressor.”

We be fake “Woke,” but unaware that our miseducation is staked in White Supremacy, and the ways it upholds racism, sexism, ableism, anti-blackness, anti-queerism and all the isms in the world.

But you worried about my Jay’s and my attire. Ok!

Local Harlem street prophet, battle rapper, and originator of the phrase, “you gon’ get this work” Loaded Lux said “a man gon build, or he gon destroy” and that that duty or burden is considerably greater when one has gained some kind of education and wields some type of power.

So we have “Educated Blacks” in education and the social justice system, whose thoughts have been conditioned by their White conservative peers, to support policies which on the surface give off the appearance that they are creating equitable programming and spaces. In actuality, all they are doing is further adding to the segregation that we see in the greater NYC school system and the incarceration of Black and Latino youth at alarming rates. So all these zero tolerance policies, and warm and fuzzy restorative circles seem well intended, but be so superficial that they get tossed. What about the kids then?

But you want to tell me that it’s the music and the culture of single parent households. Yeah, okay.

Well, I’m telling you it’s our duty, no our responsibility, to uplift the culture and we can’t do that effectively if we don’t know our history; both in the motherland, as well as our history of oppression in America. We got to realize that racism is a system and that systems evolve. In order to fight racism, we need to be hyper-aware of our actions more than our intentions.

Speaking about intentions, let me holla at my well intentioned white folks.

The problem with well intentioned white people is that they are quick to call reverse racism and cry victimization as soon as the feel uncomfortable. The problem  with that is they are always uncomfortable and get real offended whenever you advocate for yourself and point out the ways their Whiteness is oppressive.

How much oppression do I actually face from Whiteness and White privilege on any given day you ask ?

From stop and frisk policies, to hardly being able to find affordable housing in the neighborhood I grew up in, to making sure I don’t have too much bass in my voice that it scares White people when we don’t agree.

Now I’m no mathematician but I’m going to call it 75, no 80% of my life is affected by Whiteness.

The irony is that well intentioned Whites carry  “White guilt” with them, which does more harm than good, because it is derived from their attempts to seem connected, empathetic, and to denounce their privilege and their history. They try to do this by  building schools in Africa and any other places they deem third worldish, running campaigns with Sally Struthers begging for your 59 cents to feed the children, oh and by adopting little orphan babies through whatever agency Angelina Jolie gets hers from.

Or when they’re in the office, they wanna give you awkward ass daps, ask you about the new Rick Ross album or ask you if you want to go to the new Thai spot across the street because they heard it was lit.

These actions must cause them some  serious cognitive dissonance that just makes doing this equity work real hard. 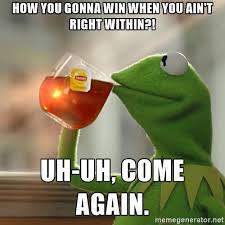 I mean I can’t imagine what’s in the mind of well intentioned White people. How can you as White person “help” us get through issues that your ancestors imposed on us, when you can’t even deal with me calling out your privilege, or when you can’t even check grandpa at dinner? The vast majority of White people are unable to face the realities of the history of their atrocities and how that shit is still happening today.

Biggie said “We can’t change the world unless we change ourselves.” That journey begins with you. So now that you know better, do better because honestly, the time is past due.

Hold it down good people and enjoy your weekend!!!

Disclaimer: If you read this piece and take offense to my critiques towards “Educated Blacks” and well intentioned White people, then it’s clear you share the same sentiments of White Supremacy that I spoke of.