For those who are powering through graduations, regents exams and other end of year programming, I hope y’all holdin it down, seeing as we are almost half way through the work week and a few days away from summer break,

First off let me give a huge shoutout to my baby girl Gianna, who is graduating as you read this. Her daycare is so fancy, they have graduations as they move to new classes. I’m so proud of her and rejoice at every one of her milestones.

So let me be as honest people. I was looking at my piece from Friday and the charge I levied to Black men in terms of making our women safe, and I realize that I played it way safe; and by doing so I played myself in three ways:

One: Tupac. While we may love and idolize him (wait y’all checked out the movie?? What y’all think?) he was in fact, a convicted rapist. I vacillated between alleged and convicted. But I know once Mr. Thug life himself went to prison, then the allegation word is thrown out the window.

I was being a man. I leveraged and protected my male privilege even in the face of horrible flaws.

Two: I was not specific in letting you know that I am inspired, nurtured and affirmed by a beautiful Black Queen who is close to my heart.

I sometimes overestimate my abilities and forget to honor the women who affirm all that I am.

Three: There are times when I say women of color and while I want to rep for all my diasporic sisters, I want you to all know that I am speaking about BLACK WOMEN.

White supremacy, toxic masculinity and political correctness can sometimes make us feel as if women aren’t worthy of male advocacy, especially in regards to Black women.

While my post was poignant and honest, parts of it were just as superficial as when President Obama offered up the same charge in his 2015 address at the Congressional Black Caucus award dinner. In his speech he acknowledged the harsh realities faced by women of color in regards to discriminatory practices that lead to a large pay gap as compared to men, overexposure to violence, and poor mental health and wellness issues.

It was great that Obama highlighted the issues and realities that many of us knew to be true. Ultimately though, my boy didn’t really offer up a solution or anything concrete like he did when he created the My Brother’s Keeper Initiative in 2013; a strategic plan to improve rates of success for young men in key areas such as education, criminal justice, and health care.

Reading back over my piece, I was like “this is cool, but damn if it ain’t shallow”.

So I’ll reiterate: BLACK MEN NEED TO MAKE BLACK WOMEN FEEL SAFE (I won’t say it again because when’s the last time we actually did it?)

We Black men like to scream Black pride but will turn around and attack our Black Queens or talk down our Black sisters for their sexual identities. Talk about cognitive dissonance.

For the longest time men of color have used misogyny and chauvinism to oppress our women, almost in the same way white men have used racism to oppress us, which highlights the irony of our fragile masculinity.

My mind was brought back to the “controversial” picture Amber Rose posted a week or so ago. While many people found the picture to be too much, insinuating that it was a cry for media attention, Amber posited it as a way to promote the feminist values she’s been rallying behind.   Not that women need permission on when and how to show off their bodies. The “Slut-Walk”  was intended to fight back against body shaming and victim shaming of women.

Now while a scantily clad young woman (you see my use Victorian English, ha!) may have bothered you, what really infuriated me was the way in which people on social media (mainly people of color, both men and women) were coming for her like crazy. They were taking turns assassinating her character all because of a picture that SHE posted on HER social media page of HER body.

Everyone was asking what’s wrong with Amber and I was sitting here wondering what the hell was wrong with people of color and especially us men of color? Why do we think it’s ok to shame our women and beat them down until they are reduced to the stereotypical “angry black women” that the rest of the world wrongly views them as?

Being a Black person in America is hard. Being a woman in America is hard. Life becomes even harder if you’re Black  and a woman.  This is also true for gay Black men. But this ain’t bout them today.  If you’re Black, a woman and identify with the LGBTQ community, pregnant etc…you face immense amounts of oppression and discrimination in all aspects, from intimate partner violence to low wages for the same work men do.

Kimberle Crenshaw would describe you as standing at the intersection of multiple identities which she coined Intersectionality. Her work around discrimination law, coupled with her reality as a Black feminist and anti-racist, deepened her understanding of the state sanctioned violence against Black women.

In the article “Why intersectionality can’t wait?,”  Crenshaw describes her encounter with Emma DeGraffenreid, one of several African American woman who lost a lawsuit against General Motors for discrimination. The realization of the lived experiences of black women and the way in which their overlapping identities leads to greater discrimination, which means they are afforded little to no protection in the eyes of the law. Essentially, the law spoke to white women and African American men, but made no distinctions for black women and the multiple intersections that they existed in.

Not only is the law working against Black women and denying their multiplicity of lived experiences but add to that oppression and discrimination by perpetuating some of the same injustices in different ways. Yes my brother, the Black woman that is a feminist, a mother, a professional, of middle class status, faces higher levels of discrimination than you.

“You can’t be pro-black, if you’re anti-queer, anti-trans, anti woman. All those kinds of BLACK people exist.”

That’s the Facebook post that went from a conversation and turned into heated debate.
People in the chat instantly started twisting and corrupting the whole point behind the post. References to Christianity were used to denounce the presence of the LGBTQ community, conversations degrading femininity and Black women ensued, and they even brought up Africa (it ain’t a quality debate amongst Black folk unless Africa is mentioned) and with that, the whole essence of the post was lost. The intended purpose was to show that to be Pro Black you have to support and love Black people and all of their many intersections.

Instead, the post quickly gave way to the isms: you know, sexism, colorism, racism, and all the rest of their ugly relatives. Mind you, most of the comments under this post were from young, educated Black people, but if you didn’t know any better, you’d swear it was a bunch of White conservatives trolling the post.

These practices and ideals promoted by Black people, work to oppress Black women and other marginalized groups within this spectrum.

For my culturally responsive educators, I want you to take these thoughts with you as you prepare for your summer vacation. Because when you come back, I hope you will be prepared to educate our young people, especially our young men, about the dangers that Black women face; not only those presented by the legal and social structures, but by young Black men who further these ideals through their mindsets and practices.

So, how do we make Black women feel safe?

Man, first we educate ourselves. Don’t walk around with this Eurocentric ideal that tells you that the world revolves around men, and that women are inferior. Remember those same Europeans thought that about Africans. Check out the Browder Files over the summer and see if you can’t bring some of it into the classroom.

Then, we gotta love and uphold our women. Life on this planet started with a woman in Africa. Let’s learn our history and inform ourselves, and reevaluate the way we love and make central the realities of Black women.

Lastly, we have to respect and honor equality and the sheer magnitude of our women. Black women bare burdens we can’t ever conceive, all while holding us down and enduring with us through our own pain.  In her brilliant TED talk,“The Urgency of Intersectionality” Kimberle Crenshaw says, “when you can’t see a problem, then you can’t solve a problem.” We have to start seeing our problems and fixing them.

We must teach young men and specifically young Black men that we are apart of the problem. Our mindsets, our actions, and our behaviors, all attribute to the oppression, stagnation, and at times deaths of Black women. We must impart in our boys and men the knowledge that helps to support and uplift our girls and women because “Black Girls Matter!” 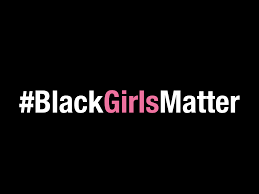