I was leading a session with my teachers when one of them talked about teaching The Odyssey and engaging their students in the development of a hero. She spoke about her young hijab wearing female students drawing their hero with blond hair, blue eyes and very muscular.

As a matter of fact, all of her students, whether Black, White, Asian, or Latino, when asked to imagine a hero who represented themselves, drew what they knew.

Immediately, a colleague in the room chimed in and asked a rhetorical question; do you know where the word hero comes from? Since I was in the front of the room and he in the back, I could see the blank stares across everyone’s face.

He then connected the word hero (a person who is admired or idealized for courage, outstanding achievements, or noble qualities.) to the Khemetic God Heru, translated into Sungod. Heru fought Set, his enemy and the representation of evil (aka satan).

The teachers were stunned, in my estimation by our colleagues breakdown. He continued on, by saying that if students know the etymology, knew where heros came from and saw heroes in their own image, then they would have something to counter the whitewashing of heroes. 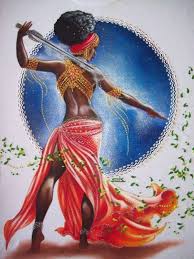 Another hand went up, another colleague across the room. She explained that if students were taught African Cosmology then they would have Oya a sa reference for what a black female deity or hero looked like.

That night I went home thinking about who my heroes were and if they represented me not just look like me, but had my values, fought for what I fight for and were fierce and focused?

Immediately, I thought of Brother Malcolm aka Malcolm Little, aka Detroit Red, aka Malcolm X aka el-Hajj Malik el-Shabazz.

I read the autobiography of Malcolm X when I was in HS. I was 16 and I loved reading and had just discovered books on Black people. I tore through that book like it was actual air which gave me life.

I had seen the epic Spike Lee film when I was in Middle School and though it was a school trip when I saw it, I don’t remember discussing it afterwards, or leading up to watching the film. It wasn’t until HS that I fell deeply, madly in love with Malcolm. After reading that book, Malcolm became my father, my guiding star, my Heru, my hero.

So, if Malcolm is Heru then who is Set?

That my dear, is White Supremacy, the battle for our lives; Malcolm vs. White Supremacy and in the end I can’t really tell who won. Even in the story of Heru and Set, while Heru represents light and the sun, Set represent darkness and the night. In the morning the sun wins but at night, Set wins. 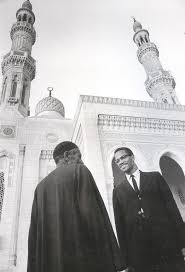 Malcolm was the righteously angry Black man with so much power. He fought with all he had, which describes his life in America. But when Malcolm got the chance to leave this country and head to the Middle East and Africa, Malcolm’s righteous anger turned into a the light of love.

See, American White Supremacy is so pervasive and so oppressive and so overwhelming that when you’re here and only here in America, you can’t get away from that anger. But as soon as you leave this country, your compassion returns and you can love again.

As we continue to delve into this idea of being diasporic people, we must understand that it requires us to leave this place, mentally and literally. And as an educator I am asking you, how do you create space for our students to leave the weight of white supremacy behind and be reminded of their humanity and greatness as Brother Malcolm did every time he left this place?

So on this day, the day of his birth, all those many years ago, we ask that you see the fullness of our Heru and engage our students in the unearthing of their rightful place as modern day heroes. Our crown, their crown has already been bought and paid for. All they need to do is keep their heads held high, so that it doesn’t fall off.

Yeah, so I’m a little sappy today. I am so grateful for Brother Malcolm and miss him and his spirit so much that though I’m happy, my heart is heavy.