Loving Blackness in the likeness of Arturo Schomburg

I was with my mentor; we had just left the elementary school and were late for a meeting with students. We walked in and there were about fifteen beautiful black students sitting around the conference room table. The principal pulled up a chair to the head of the table and told me that was my seat. He moved off to the side, where my mentor and other administrators sat. I was on the hot seat. I wasn’t sure what I had walked into, but I knew all was not well with the children.

I had been summoned to this meeting because the students at this 6-12 school were upset and frustrated with their teachers, at the school, and with the system of public education, which as they so eloquently explained was “created to make them hate themselves as black people.” These young people were sick and tired of being portrayed as nothing more than helpless and hapless “niggers.” This meeting was their profession of love to themselves, for themselves and of themselves, as children of the African Diaspora. In other words, this was their “I’m not here for this shit” declaration. 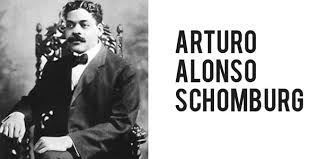 Arturo Schomburg had a similar, “I’m not here for this shit moment.” As a young student in his native Puerto Rico, Schomburg was told that Black people lacked a culture and history from one of his educators. The statement, which was an assault on him and his humanity, set him off on a lifelong journey, not only to prove that educator wrong but to also ensure that no child of the Diaspora would go without knowing the greatness of their lineage.

Schomburg, was a self-proclaimed, Afroborinqueño, before that term was even a thing. The articulation of showing solidarity with both his Puerto Rican heritage and African heritage during the early 1900s was an unaccustomed idea. But everything about Schomburg, was uncommon. He was a scholar and bibliophile of the African diaspora who scoured the world collecting historical and cultural artifacts that spoke directly to the history and culture of Black folk. In the end, he amassed a private collection of over 10,000 items reflecting the diversity and extensive history of ethnic, African people in the United States and around the world. The collection included books, manuscripts, artwork, and other objects of cultural significance.

In 1926, Ernestine Rose, a librarian, advocated successfully for the purchase of his personal collection and added it to the Division of Negro Literature, History and Prints of the Harlem branch of The New York Public Library.  Schomburg then served as curator of his extensive collection from 1932 until his death in 1938. Today, the Schomburg Center for Research in Black Culture of The New York Public Library is one of the foremost research centers on Africa and the Diaspora, with more than 10 million items.

So, let me take you back to my meeting with those brilliant black scholars. At the heart of their demands, were four simple, though not easy requirements: (1) to change the entire curriculum (including all subjects and grades) so that it centers the greatness and diversity of Blackness in a K-12 system, (2) develop and deepen their skills; provide rigorous instruction on skills and tools that develop their ability to disrupt the system of white supremacy not assimilate into it, (3) create a community in school that centers love, family, legacy, tradition, soothes trauma, and sees black students as humane and deserving of care and (4) provide an authentic, relevant and responsive exploration of college, career and entrepreneurship that provides them with a foundation to make informed decisions about ways to access the kind of future they desire.

At the end of the conversation, the students explained that they wanted to ensure that those unde 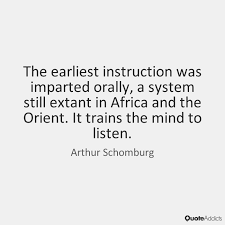 r them, receive an education that supported the positive racial identity of blackness. They talked about how having this unapologetic love for our greatness, our history, and our present day life would create a future for black people that none of us could fathom. These students walk in the image and practice the ideology of Arturo Schomburg and amazingly, he is not known to them. But his blood flows through their veins and he was in this room as we sat and talked about our plans for the future of this school. I listened carefully and I am here to help answer their call. I know Schomburg would be proud of them, but ashamed of us, because we hadn’t taken up his mantle after his death.

So dear Educator, I ask, have you ever been to the Schomburg? Do you use its work to center your instruction and guide your practices? If you live elsewhere, outside of the NYC tri-state area, have you sought the institutions that center blackness in their mission? Our children are making it very clear, they love blackness, unconditionally, unapologetically and are requiring us to love blackness too.

I ended the meeting by borrowing a line from Toni Morrison’s Beloved, letting them know, they were “my very best thing,” the most precious and valuable thing to me. These students come from a long tradition of wanting better for those who come behind them. They honor Schomburg in their defiance and love. And I ask you, dear Educator, how do you honor the legacy and life of Arturo Schomburg?