Not one dime and the economic boycott 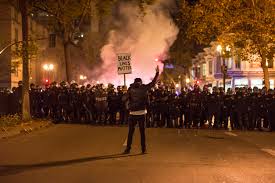 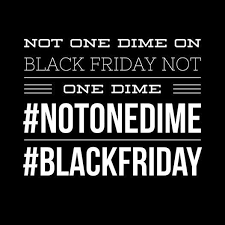 I still remember being glued to my TV as the residents of Ferguson, Missouri took to the streets to protest the murder of Michael Brown. I remember being so proud of them because they refused to be quelled. Night after night after night and all through the month of August and what many of us don’t realize, their protest went on for a year. The media only covered when the murder took place in August, when the not guilty verdict for Wilson happened in November and when the one year anniversary rolled back around in August. But activists like Rahiel Tesfamariam were out there organizing, protesting, building community and holding the police to task.

One of the many outcomes of the Ferguson protest was the call for an economic boycott in the name of Black Lives Matter. From that,  #notonedime was born: “We must commit ourselves to divestment from oppressive systems, as we strategically invest in our collective uplift.” The #notonedime movement seeks to wield the 1.1 trillion dollar buying power of African-Americans to force corporations to have a social conscious around racial inequalities with a specific focus on state violence towards blacks and economic engagement in social issues that would uplift the diaspora. The #notonedime movement asks black people specifically, and anyone who wants to show solidarity with the plight of black people in America, to abstain from spending any money with non-black owned companies from Black Friday to Cyber Monday. Built on the framework of Remembrance, Solidarity, Ujamaa and Black Power, the #notonedime movement seeks to build on the legacy of the Montgomery Bus Boycott of 1955.

On December 1st, 1955 Mrs. Rosa Parks’ planned refusal to move to the back of the bus in conjunction with Rev. Dr. Martin Luther King Jr. being jailed in Birmingham, sparked the Montgomery Bus Boycott, which crippled the city of Montgomery financially.  The removal of the black dollar coupled with the brutality of state reaction to black protest forced the desegregation of not only Montgomery but the entire state of Alabama. Many do not realize that the boycott lasted from December 5th, 1955 until December 20th, 1956, 381 days.

Often referred to as the Children’s Crusade, the  protest showed the power of the black dollar to the powers that be and showed Black America that the color that mattered to a capitalist society was green and we could use that green to gain economic, social, psychological, and political equality. The protesting and boycotting was an avenue for children to stand up for their God-given, civil rights. Often overlooked, children and teenagers were integral to the Civil Rights movement. Their dedication to freedom and justice and equality were pivotal during that decade of unrest.

Scheduled to start on December 5th, the 61st anniversary of the Montgomery Bus Boycott, Shaun King was set to begin the #injusticeboycott. An economic “boycott of cities, states, businesses, and institutions which are either willfully indifferent to police brutality and racial injustice or are deliberately destructive. To be clear, to be willfully indifferent is to be deliberately destructive – so our boycott will treat indifference and outright contempt as one in the same.”

However, the boycott has begun earlier than scheduled. The election of Donald Trump as president has sped up the desire to withdraw funds from companies that support him and ignore or even support the deliberate abuse of state power and racial injustice. The #injusticeboycott is not alone in the movement to reject the Trump presidency. The hashtag #grabyourwallet has sparked the creation of a boycott list of companies that work with or support the Trump organization. And most recently, we see at least three NBA teams are no longer staying at Trump affiliated hotels when they travel.

Sooooo, what does ALL OF THIS have to do with you, dear educator and parent? You keep on asking, what do we do now? Here’s a step. Keep your money out of these companies and withdraw your passive approval of their policies. And listen; each of these movements have demands for these companies and they offer alternatives for where you can put your money, so that your money can follow your mouth.

Engage in disciplined action to spark the Children’s Crusade of this decade. Get to planning, figure out the content vehicle that you will use to allow students access to be in this movement for liberty and justice for all.